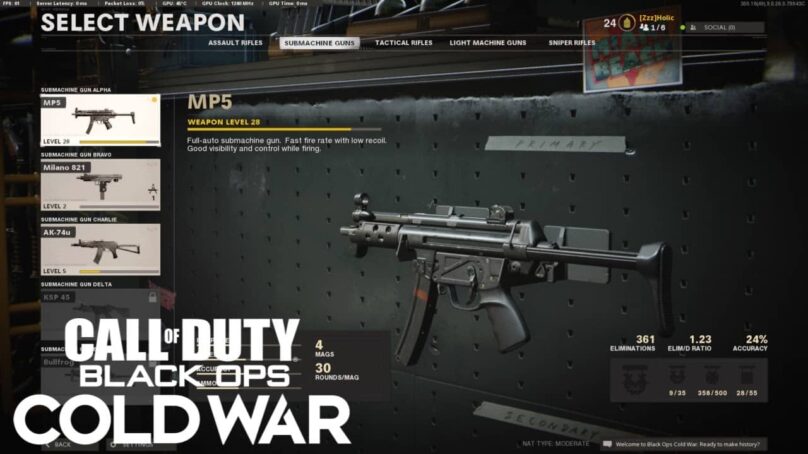 The first Call of Duty: Black Ops Cold War patch is officially here. For a short amount of time, the patch undid the much appreciated nerfs that were applied to the MP5 that came with the game. Other than temporarily resurrecting the game’s most popular gun, Black Ops Cold War’s launch patch makes many different adjustments to help balance out the game. After another update to the patch released on Friday night, once again the MP5 changes have been restored and the gun is officially nerfed.

Earlier this week, Treyarch nerfed the MP5, which had spent several days dominating every single multiplayer match. The gun was so strong that it was frequently the only weapon taken in certain matches. The nerf brought the gun’s power in line with the rest of the game by lowering its damage range and making its initial recoil a little worse. All of these changes were briefly reverted as of the patch the developer released on Friday. Without delay, an update came within hours after the patch was released and the MP5 is now back to the original version.

On the topic of new changes, Treyarch also set its sights on a few of the game’s other powerful weapons. Among the newly nerfed guns is the M16, which used to be just a step behind the MP5 in overall power. But Treyarch has reduced the weapon’s max damage range, and made it slower to use after sprinting or moving. The Fear 1 assault rifle also got nerfed in this patch thanks to a reduction on both it’s max damage range, and its overall max damage.

As you might expect for the first update after launch, this patch also includes dozens of other changes. To see everything that’s been changed in the Black Ops Cold War Nov. 20 patch you can check out the full patch notes.